%74 children between the ages of 6 - 18 are not physically active in Turkey.

Sabri Ülker Foundation hosted two scientific sessions at the “11th International Childhood Obesity and Nutrition Conference” which took place on March 15-16, 2018 in Barcelona.
At the conference, it was emphasized that nutrition during childhood is the most important factor in the raising future healthy generations, the “Balanced Nutrition Education Project”, which is implemented by Sabri Ülker Foundation along with the General Directorate of Basic Education of the Turkish Ministry of National Education since 2011 at the primary schools, was presented as the best practice in its field.
During conference, Sabri Ülker Foundation held a press conference and presented the results of the research “Sources Used for Healthy Nutrition Information and Trust” which is the most comprehensive study that has been done in the recent years regarding the information sources which play a significant role in the affecting the eating habits in Turkey.

Nutritional training at an early age is a must

Sabri Ülker Foundation General Manager Begüm Mutuş pointed out the projects carried out by the Foundation for the future of public health and said: “We have taken an important step with “Balanced Nutrition Education Project” in order to raise healthy future generations and we succeed on changing the eating habits of our children positively. We also carry out important studies in order to prevent misinformation about health and nutrition. We reach 12 thousand single users with “For Accurate Science” monthly which is the first scientific digital information platform of Turkey on nutrition and healthy lifestyle. We will continue to attend national and international conferences about nutrition and health; and we will continue our studies to communicate and inform the public regarding scientific, accurate and up-to-date information”.

Prof. Dr. H. Tanju Besler: “The children are the most influenced by the nutritional problems”

Prof. Dr. H. Tanju Besler, Vice Rector of Doğu Akdeniz University and Member of the Science Committee of our Foundation, emphasized about childhood obesity in Turkey and the details of the Balanced Nutrition Education Project at the session. Prof. Dr. Besler stated that childhood obesity might lead to many diseases in older ages such as coronary and artery diseases, diabetes and metabolic syndrome and expressed that according to the World Health Organization, 1 in 5 children in Europe is overweight and 1 in 3 children obese.
Prof. Dr. Besler said: “According to the 2010 data of the Turkish Nutrition and Health Survey, 21 % of children between the ages of 0 - 5 and 22 % of them between 6 - 18 are overweight/obese. 74.2% of them don’t do physical activity. So, the children are influenced the most by the nutritional problems. And according to the 2013 Turkish Childhood (Ages 7 - 8) Obesity Survey results, 14% of children are overweight and 8% of them are obese. In order to prevent overweight during childhood, the children should learn about the essentials of adequate and balanced nutrition and the importance of physical activity and should make it into a habit in the present and future. So, within this context, the Sabri Ülker Foundation has been conducting the “Balanced Nutrition Education Project” with the cooperation of the General Directorate of Basic Education of the Ministry of Education since 2011”.
“Balanced Nutrition Education Project” says “You can eat everything in a balanced way. What you need to do is learning how to keep the balance” in its 7th year, reaches more than 6 million parents, teachers and children in Turkey’s 15 provinces İzmir, Aydın, Antalya, Gaziantep, Kahramanmaraş, Kayseri, Erzurum, Trabzon, Sinop, İstanbul, Eskişehir, Adana, Bursa, Rize and Ankara. In the 2017-2018 academic year, messages of the Balanced Nutrition Education Project and also updated teaching programs took their place under the title of “Balanced Nutrition” in the Healthy Life Unit in National Life Science Curriculum. In addition, the basic nutrition training was given to approximately two thousand teachers within the scope of in-service training to encourage personal and professional development of teachers. The cooperation of institutions is vital against obesity

At the meeting Dr. Stacey Lockyer, Nutrition Scientist of the British Nutrition Foundation (BNF) explained the details of the nutrition/training program “Food - A Fact Life” that BNF implements in schools in England. Lockyer said: “The childhood obesity rates in England are remarkably high. That is why projects of nutrition training during childhood have great importance. We achieved so much with the project in the United Kingdom in 7.500 schools on children between the ages 3 - 18. Our cooperation with the public institutions is a part in the success of the project. We believe that the non-governmental organizations play a great role in issues such as public health. So, our experience and information exchange with the Sabri Ülker Foundation is crucial”.

At the meeting, the results of the research “Resources Used for Nutrition Information and Trust in These Resources 2018” carried out by Sabri Ülker Foundation in order to draw attention to misinformation in the field of nutrition and health. The results of the research proved once again that the Sabri Ülker Foundation has progressed in a successful way against misinformation and got results for its efforts.
“Determining the Health Themed Publishing Principles in Turkey: Analysis of Health Themed Publications in The Context of Source, Message and Target Audience” (2013) research, carried by Anadolu University Faculty of Communication Sciences with the support of TUBITAK, had revealed that society is doubtful about the information they get from communication channels. According to the research, the percentage of those who say that they “Always” or “Mostly” trust on the information and news about health in newspapers is 27%, trust on the information on the Internet is 36%while this figure is 40%on TV.
The research “Resources Used for Nutrition Information and Trust in These Resources” coordinated by Sabri Ülker Foundation, revealed that more than half of the community now trusts the specialist physicians mostly. The research carried out with 1241 people in 15 provinces throughout Turkey, also revealed that more than half of the society is interested in nutrition, and that in this context, television and social media are the least trusted ones, although they are among the channels where information is most frequently obtained.
According to the research, one out of 10 people who have get information from any channels about nutrition always implement what they hear. One out of every 5 people is concerned with general information about health and weight loss/diet as well as nutrition.

According to the results of the research “Resources Used for Nutrition Information and Trust in These Resources”;

• Nutrition is the most popular topic on healthy nutrition with 32%. Whereas the percentage of those who are interested about general information about health and weight loss/diet is 22, the subject of nutritional supplements took the last place with 2%.
• In the most reliable channels on nutrition, the specialist physician ranks first with 62%. While family/friends/environment is 38% and internet sites are 22%, television from which the most information is obtained, is the least trusted channel with 13%.
• The first three topics most interested are nutritional habits with 9%, healthy nutrition with 6%and whether the foods are healthy or not with 4%. 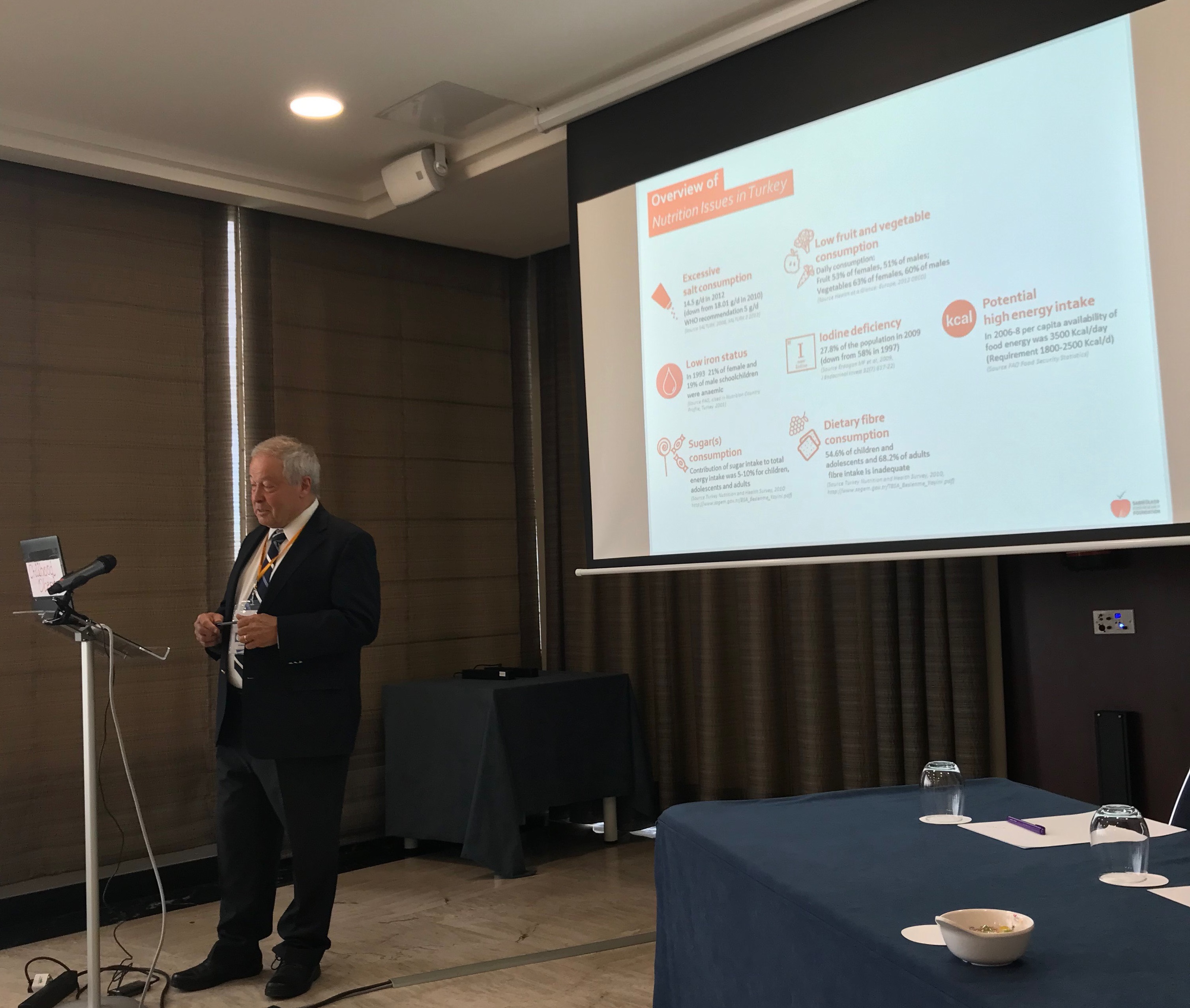 There was a great interest in scientific sessions organized by Sabri Ülker Foundation.

Member of the Science Board of the Sabri Ülker Foundation, Prof. Julian Stowell gave a speech at the session that Sabri Ülker Foundation held at the 11th International Childhood Obesity and Nutrition Conference talked about the details of the project and the changes in the nutritional habits of children and the achievements of the project with her presentation titled “Balanced Nutrition Education Program in Turkish Schools”.

And during the workshop named “School-based nutrition trainings: The Best Practices in Turkey, England and Spain” which was another session that the Foundation hosted, the nutrition practices in schools were discussed by Dr. Burcu Aksoy, Scientific Communication Executive of the Sabri Ülker Foundation; Dr. Stacey Lockyer, Nutrition Scientist from the British Nutrition Foundation; and Dr.Teresa Valero Gaspar, Information and Scientific Communication Director of the Spanish Nutrition Foundation. 14 April 2019 Prof. Dr. Mr. Saatçioğlu inspired young scientists and leaders with his path-breaking research about the treatment of prostate cancer, on which he was working for a long time!
Click here to view! 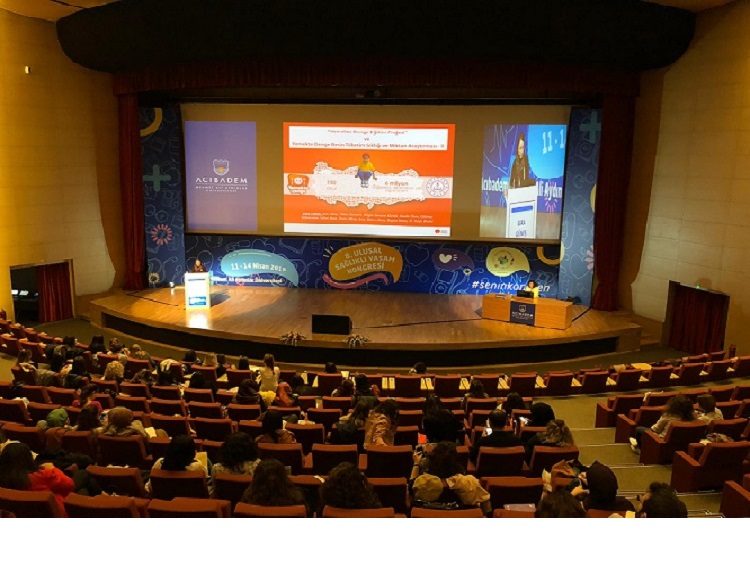 11 April 2019 Prof. Dr. Mr. Saatçioğlu inspired young scientists and leaders with his path-breaking research about the treatment of prostate cancer, on which he was working for a long time!
Click here to view! 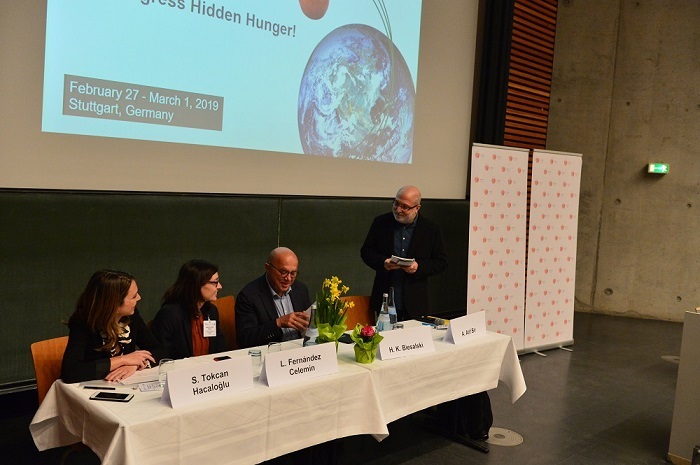 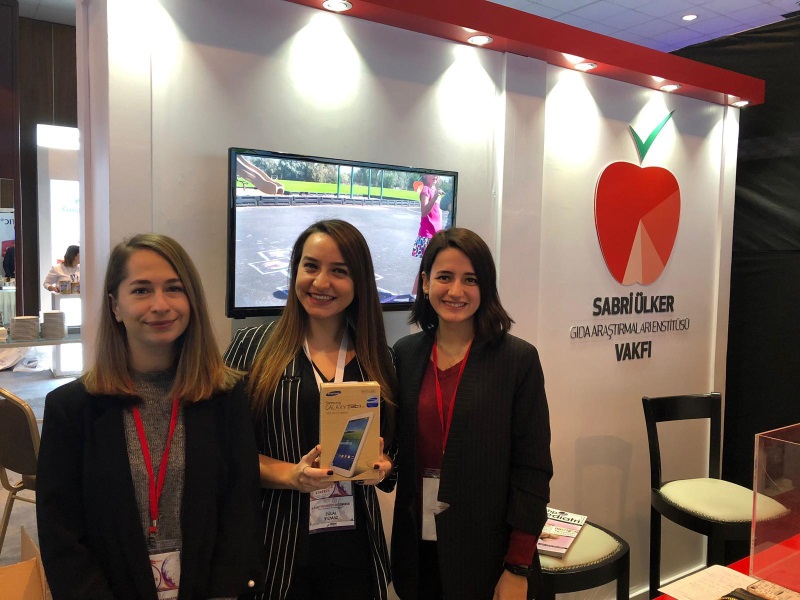 30 November 2018 iGrow, a practical mobile application for monitoring of children’s physical development, which was adapted in Turkey by Sabri Ülker Foundation in cooperation with TNO (Netherlands Organization for Applied Scientific Research) .
Click here to view! 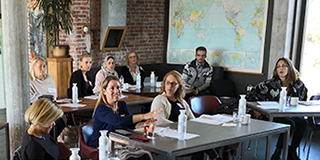 28 October 2018 Our Foundation attended to the “EFAD 40th Year Conference” organized by The European Federation of the Associations of Dietitians (EFAD) on September 28-29.
Click here to view! 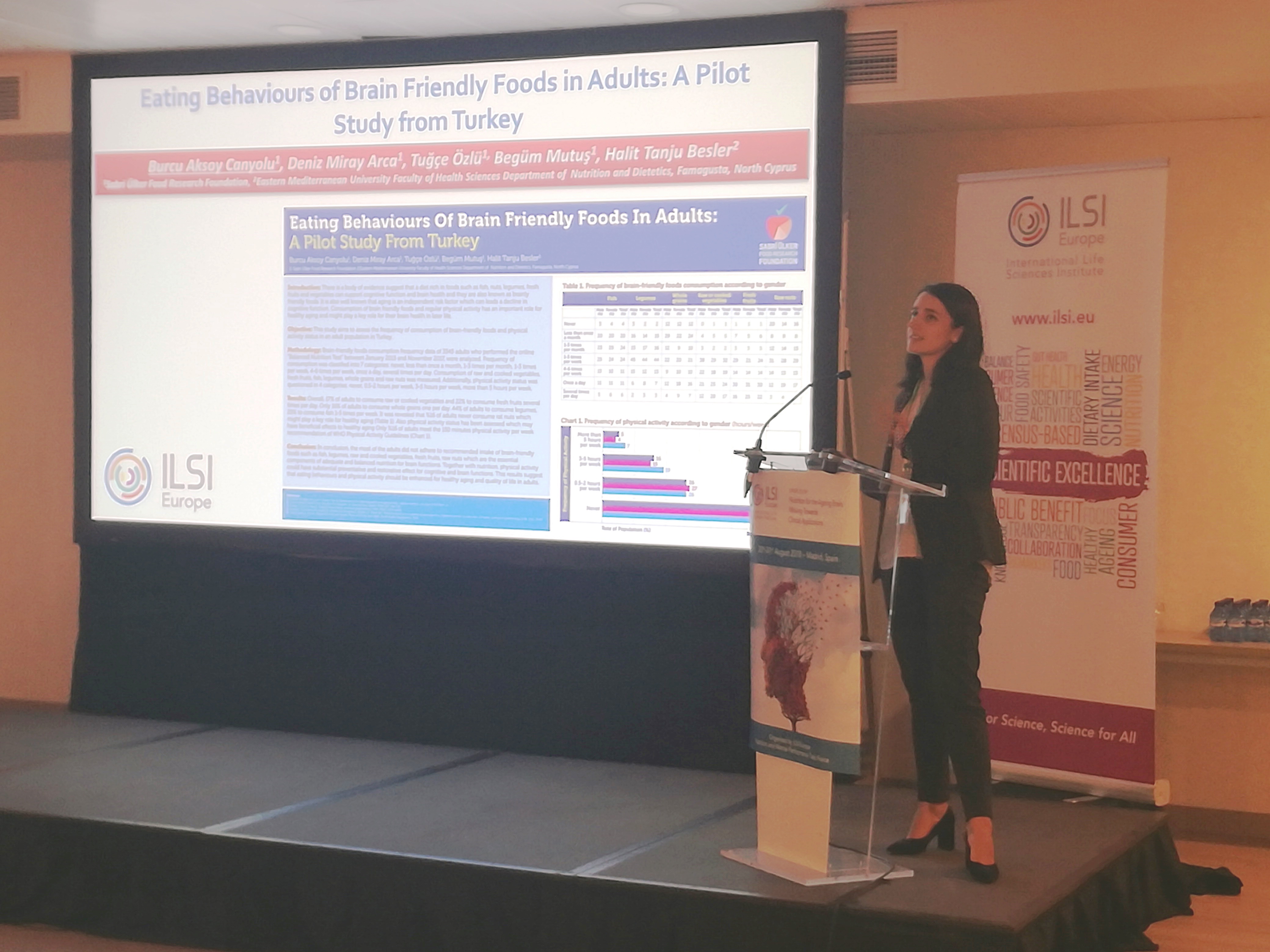